UK Energy use: mining and construction sectors are lagging

A new report from Ignite Economics, comparing the best and worst performing sectors of the UK economy for energy use over the past three decades, has identified that mining and construction have shown the most disappointing performance, whereas professional services has led the way.

The comparison looks at energy intensity, which quantifies the amount of energy required to produce an equivalent unit of economic value. This metric is chosen to make a fair comparison between the different sectors of the economy and to take account of the fact that some sectors have been expanding, whereas others have been contracting. 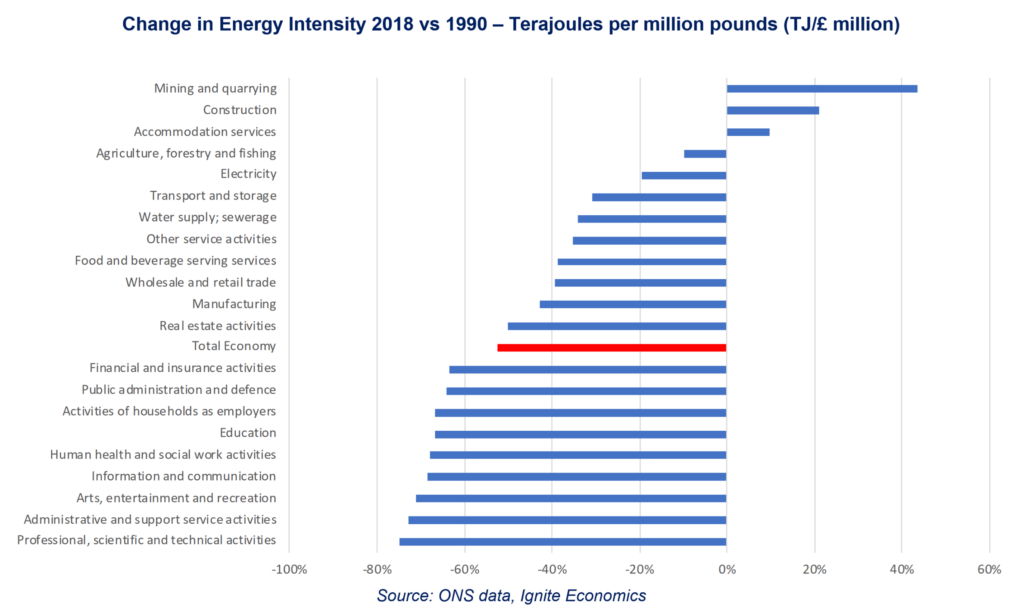 Encouragingly, the overall trend in energy usage by the UK is downwards. Consumption peaked in 2005, when it hit 250m tonnes of oil equivalent. By 2018, it had fallen to under 200m tonnes. 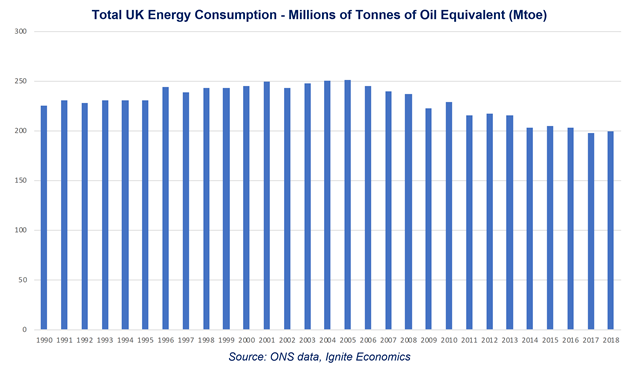 Breaking down the UK energy market by type of user, the largest segment by far is individual consumers, with a 37.4% share; it is followed by manufacturing and transport & storage, with 20.2% and 14.9% share respectively. 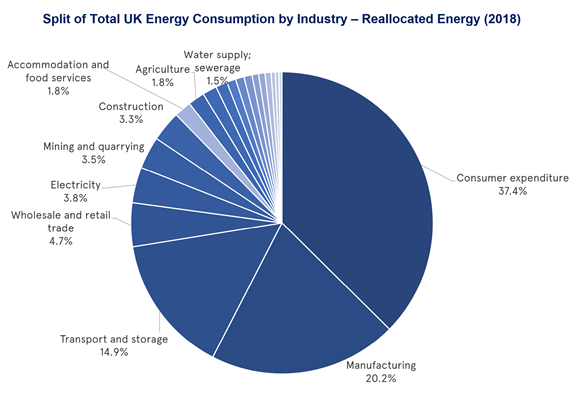 Another positive trend is a decline in the use of fossil fuel energy, which has fallen by 22%, to 81% of energy usage in the UK, down from 92% in 1990, an effective reduction of 45m tonnes of oil/ yr. By contrast, energy from renewable sources has increased 14-fold; and now represents 11% of total energy usage, or the equivalent of 22.6 million tonnes of oil/ yr. Including nuclear, 37 million tonnes of oil equivalent were generated from non-fossil fuels in 2018. 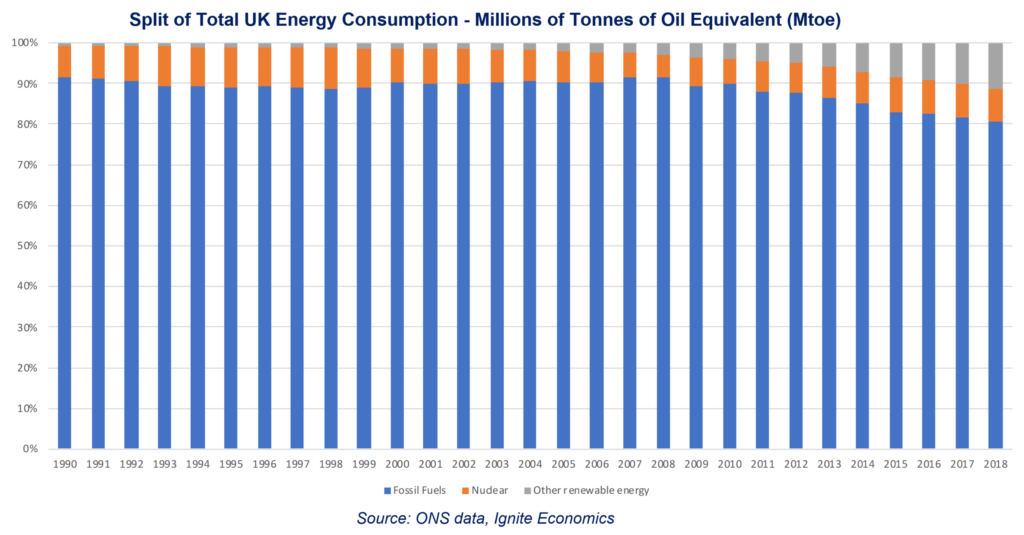 Whilst the majority of the gains in usage of renewable energy has occurred in the past decade, there has been an exponential increase since 1990. A major breakthrough occurred in 2017, when the price of solar and wind energy matched the price of fossil fuels for the first time.

The Ignite Economics report was presented at the launch of the Energy & Environment Alliance, a new coalition of hospitality businesses and investors, which aims to transform the sector to become climate positive.

A closer look at the UK accommodation industry reveals that it has increased its energy usage by 47% since the turn of the century (2000-2018) – more than any other industrial sector – while the overall economy has seen its energy usage decline by almost 20% over the same period. 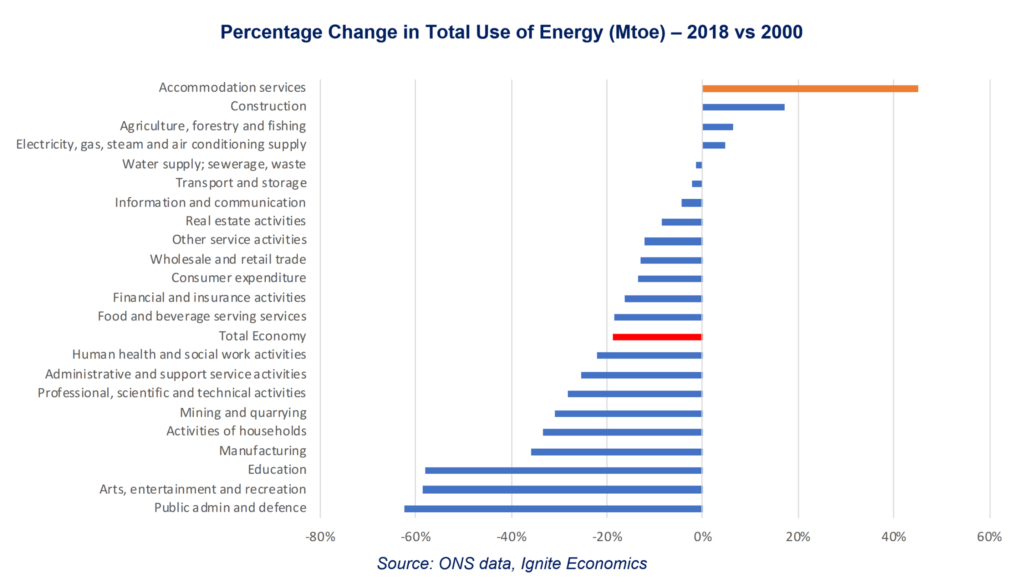 As the accommodation sector has grown by around 70% during this time, increases in energy usage may not seem so bad. However, Ignite Economics still estimates that the industry could save 15-20% of its energy usage, which is up to £270m/yr, or up to 660m kg/yr of CO2.

Ed Birkin, CEO, Ignite Economics, said: “There is no question that the long-term trends in energy usage in the UK are all in the right direction: total energy use is down; energy intensity is down; the proportion of fossil fuels is down and the usage of renewables is growing exponentially. However, some sectors of the economy are doing much better than others and in the accommodation sector, there is clearly scope for considerable savings.”

Peter Till, Chairman of the newly formed Energy& Environment Alliance, concluded: “I am most grateful to Ignite Economics for its valuable and insightful report. It is the first time that I have seen accommodation benchmarked against the rest of the economy on energy use and the findings are eye-opening. Whilst there is clearly scope for improvement, we now have a very useful baseline against which to measure our efforts.”

Ufi Ibrahim speaks at the IHIF 2022 panel: ‘Sustainable Operations: How to Operate Sustainably and Profitably’

During the 2022 International Hospitality Investment Forum (IHIF)'s panel ‘Sustainable Operations: How to Operate Sustainably and Profitably’: Ufi Ibrahim, CEO of the Energy & Environment Alliance and her fellow panellists urged hoteliers and investors to start making changes [...]

The Energy & Environment Alliance (EEA), a not-for-profit coalition of hospitality sector leaders that is developing the world’s most reputable sustainability assessment scheme for Hotel and Apart Hotel assets; today announced its partnership with [...]